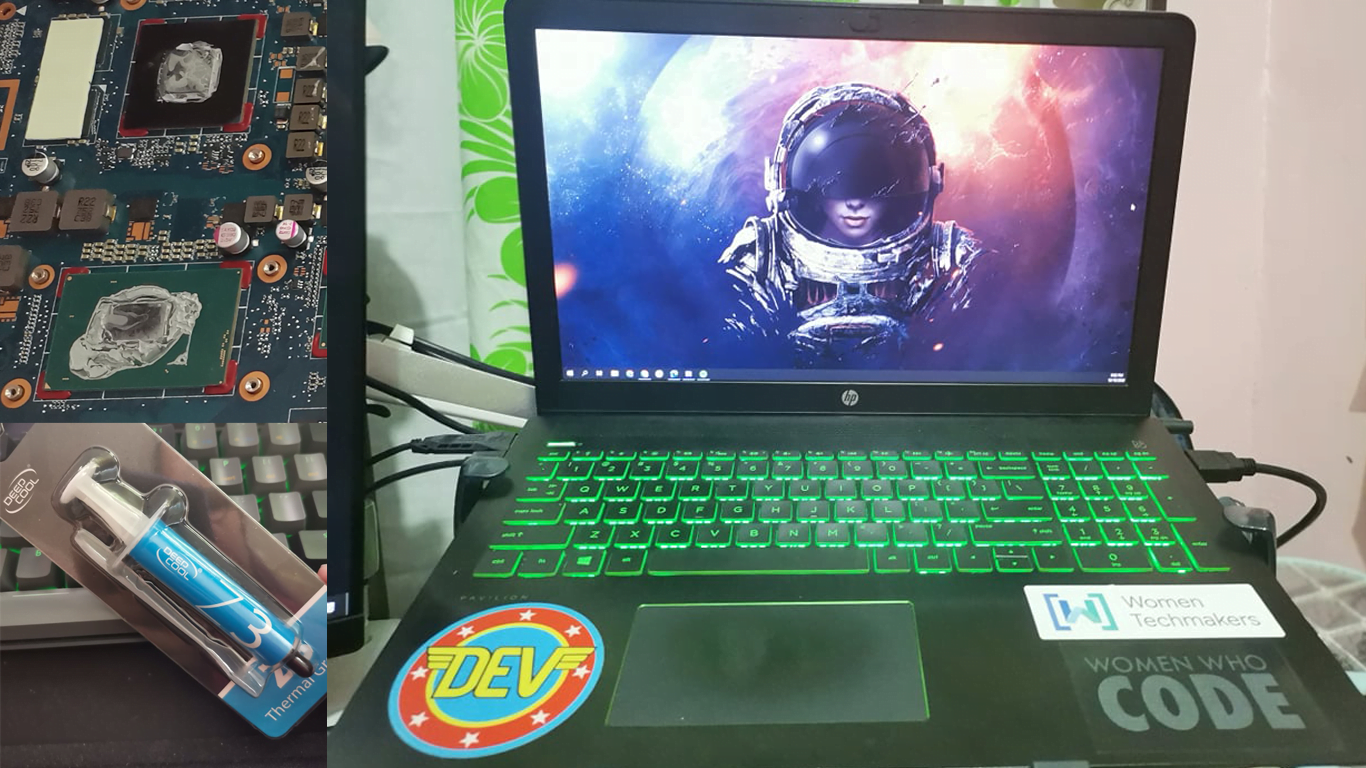 Early this year, I’ve noticed that Clover was running slow and overheats. Yes, I name my laptops and I love them.

I remember when I first saw her(gave her a gender too), I was so magnetized. I wanted to purchase her right away but didn’t. I told myself to wait for a month, and continued using the previous unit that I had. I still have Carrie(my previous laptop) which is not in a good condition. She had a broken screen and it was leaking. So I dismantled her, and used the LCD screen of my first laptop, Midori(has dead motherboard; RIP), to continue working.

A month had passed and I still wanted to buy her, so I did. I was the happiest kid on the block, and I’ve used it everyday since then.

Gaming and programming are the major things that I do and I need great computing power within my budget. Clover, HP Pavilion Power 15-cb0xx, was perfect!

Now in 2020, Clover was slowing down and overheats. I thought the fans need a little bit of cleaning, but problems still persists. First upgrade was adding an SSD. Then after a while, programs sometimes slows down or lags so I decided to add more RAM. I bought an additional 8GB of RAM, and now I have a total of 16GB. I wanted to upgrade it to 32GB but the computer shop that I went to only had 8GB. I was also informed that the battery was bloated and it needs to be replaced. So I bought one online, and then replaced it myself.

I was a bit happy because Clover processes things smoothly with the help of the additional RAM but the overheating wasn’t solved. I thought that repositioning Clover near the AC would solve the problem, but I was wrong.

Just a few weeks ago, I constantly get Low Client FPS in-game(mind you, she still overheats) and I didn’t enjoy that. My friend suggested that my laptop probably needs re-application of thermal paste/grease. I haven’t done that, and it has high probability that it could improve Clover so much. So I asked my Facebook friends for leads to where I can buy thermal paste in the city. They didn’t disappoint! They responded right away and helped your homegirl out!

I got the thermal paste(Deep Cool Z3), and opened Clover for “surgery”. I was so careful not to misplace the tiny screws so I placed them on a paper and mapped them.

We need to be careful when handling an open surgery to avoid mishaps! I removed the battery first before touching any component on the motherboard. After that, unscrewed the fans and brushed them clean.

Next was carefully removing the heatsink, and viola! I saw a solid ugly thermal paste.

I removed the dried out thermal paste using a spare eyeglass cloth that I had, then brushed more dust using a makeup brush. It is very important to use an anti static brush but I don’t have that. After cleaning, I was admiring how the board looks for a few minutes.

The fun part was applying the new thermal paste. How much did I apply? Most articles say a pea-sized amount. I applied probably a pea-and-a-half size amount of thermal paste. Don’t judge. I spread it a bit, and then placed everything back.

The moment of truth was when I turned Clover back on after the surgery. I was anxious at first because it was booting longer than expected. At this point, I was praying that it was a successful operation. Lo and behold, it was!

Clover doesn’t overheat anymore, and could run games smoothly for now. I am happy of how things are with Clover, and so far so good! The true test is when I get to play Cyberpunk 2077. Good luck to me and Clover!